In recent years, Härmälänranta in Tampere has been under construction and new buildings are continuously going up in the area. Construction company Skanska ordered a mural that honors Härmälä’s industrial history.

Skanska, the main constructor in Härmälänranta, wanted to brighten up a 47 meter long grey wall in the area. The population in Härmälänranta has grown tremendously over the years, and the idea was to listen to what the residents had in mind for the artwork. The established Hungarian street artist Fat Heat was chosen to paint the residents’ ideas.

Härmälänranta has a strong industrial history, and the residents of the area wanted it to show in the mural. The first flight attempt in Finland was made in Härmälä with an aircraft called Demoiselle. Alongside of that, the government’s aircraft factory was located in the area since 1936. Härmälänranta’s strong connection to aviation can be seen in the mural as it has captured the Demoiselle aircraft and an early straddle carrier that was used in the factory. The third vehicle to be found from the painting is a trolley bus, which is is also related to the industrial history of the area. The trolley buses were manufactured in the aircraft factory and Tampere’s first trolley bus left from the city centre towards Härmälä in 1948. In his mural, Fat Heat has interpreted this history with a style characteristic to him. The mural has brought some long-awaited color to the area that some might think lacked the edge. 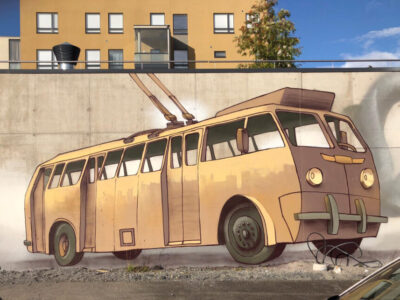 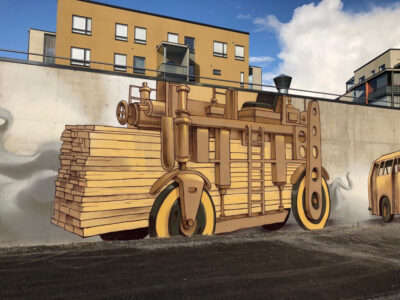